Student Art in the Library: The Contributions of Trinity Women

By Benjamin Harris
Mar 17, 2022
in About the Library,Collections,Students

While this blog entry will be posted at a later date, I sit down to write it on the celebration of International Women’s Day. I’ve received some notes, from colleagues and others, reminding me of its purpose and significance. Amazon has sent a message suggesting I play their Britney playlist in celebration, but I clicked on Halsey instead.

In just a few weeks, I’ll have the pleasure of seeing the spring 2022 Senior student art show. Each year I have the opportunity to acquire pieces for the library’s collection of student art, and I almost always find a piece that I’d like to add to my own collection. Knowing so many students on campus and seeing them change, grow, and “become” during their time at Trinity is a constant in my work, but seeing the actual results…the consequences…the creations that mark their time here is always insightful, always exciting. You may visit the library and see these on display. I’m one lucky audience member who usually knows a little bit more about the meaning and the impetus for these works.

The 2018 senior show included a freestanding sculptural work by Deliasofia Zacarias, What You See Depends on Where You Stand. Composed of mirrors and painted blocks suggesting different skin tones, Zacarias intended the viewer to see their own specific color amidst the variety of other colors surrounding them in the sculpture. On some of the mirrored squared, the artist screenprinted the phrase “El Futuro Es Mio” (Spanish for “The Future is Mine”). Zacarias wanted the viewer to repeat this mantra as they looked at themselves in the context of the sculpture, to remind the viewer that while socio-political forces may try to control you or your life, you are the only one who gets to define your future. 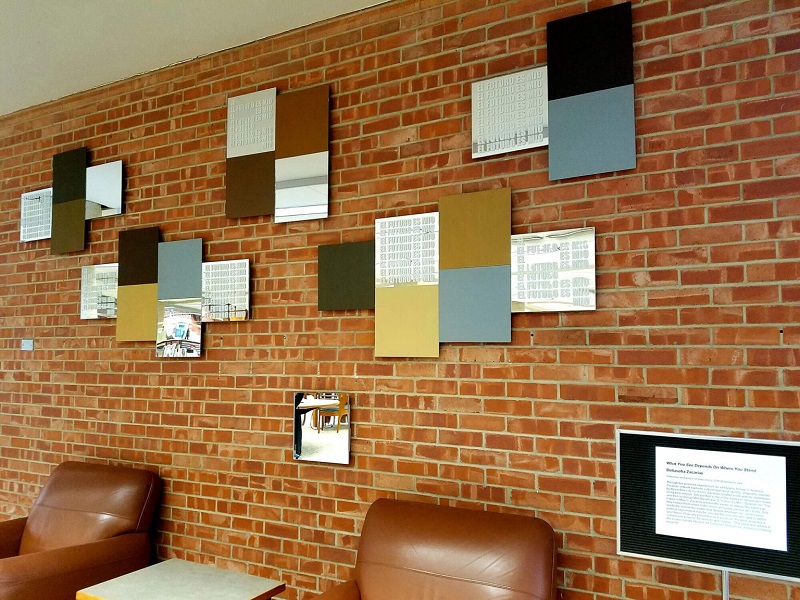 Since a freestanding sculpture made primarily of mirrors was likely to experience an unfortunate fate in our busy third floor, the artist recreated the piece as a wall installation instead and as you pass it in the Information Commons, do you look to find yourself in its mirrored surfaces? Do you see yourself in its message?

The viewers of Anthoula Christodoulou’s (class of 2017) Why Live in Abundance may be unaware that this painting is one in a series focused on the effects of the Syrian civil war on its citizens. As a native of Cyprus, Christodoulou felt a closeness to these survivors and hoped to create a similar type of connection between the victims in Syria and her audience. Working in a large scale to combat the desensitization caused by viewing similar images, the artist intends for us to connect more directly with the trauma of war. Her intent is to encourage us to do more than just look, but to relate, and ideally to act. 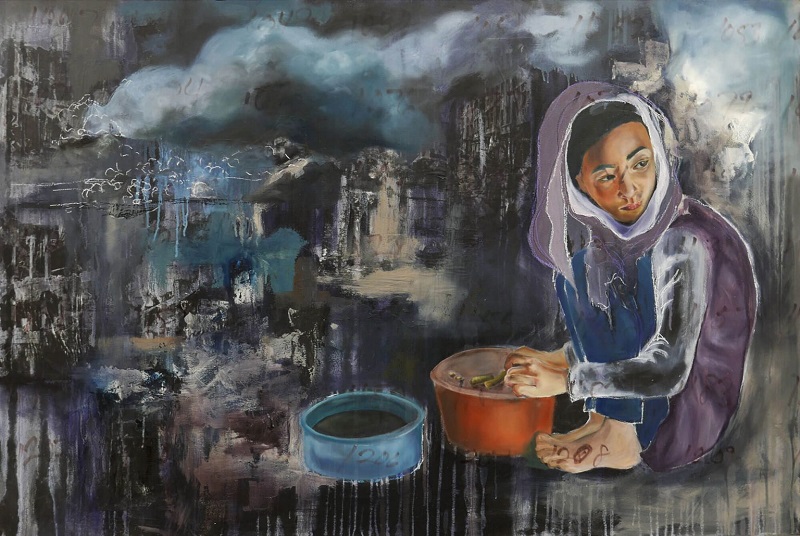 Another piece in our collection takes the strength of women as its subject. Las Chingonas by Alexus Jimenez (class of 2019) offers a portrait of three women, three women whose example inspired and supported Jimenez into adulthood.  The artist seeks to dismantle the ethnic and gender stereotyping of LatinX communities in the United States by highlighting the exceptional strength and power of the women who continue to inspire her. If, as the artist has stated, her intent is to “capture a moment of pride and an unwillingness to give up” in her portraits, she more than achieves this in Las Chingonas. 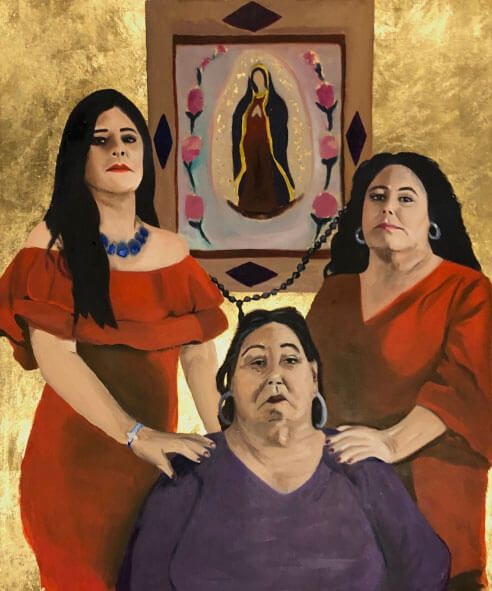 This list could go on, to include Katy Freeman’s five portraits of her family members that are quite popular with viewers (please stop rearranging these, thank you). Then there are HiIlary Dohoney’s large-scale images of items typically thrown away thoughtlessly without recognition of the overall environmental impact of this waste.  Chloe Walker’s Terratoma is another standout, with its vibrant watercolors recasting the traditionally unpleasant images of anatomical abnormalities. To know these women, their inspirations, and their concerns through their work on exhibit in the library is a gift that I hope will continue to grow for future audiences.