Vistas from the Past: the History of Landscaping at Trinity

This post was written by Nathaniel Hajovsky ’22, the Exhibits Intern in Special Collections & Archives for Fall 2021.

American intellectual culture and literary tradition has always had a deep connection with the environment. From the romanticism of Henry David Thoreau and Walden Pond, natural spaces have been highly valued to create peaceful and thoughtful communities. Our very own Skyline Campus is a reflection of that tradition.

LeeRoy takes a moment away from his studies to ponder the greater meaning of life, circa 1995. Courtesy Special Collections & Archives.

Special Collections & Archives welcomes you to reflect on the landscaping that has made campus. From the design of landscape architects Marie and Arthur Berger to the daily hard work of the physical plant staff, countless individuals have contributed to the beauty of our surroundings. Trinity’s staff was not the only force for beauty. Student committees have also been involved since the planting of the very first tree on campus!

When Trinity first acquired the land that would become our Skyline Campus in the late 1940s, the terrain was blasted by sun, and torn apart from its previous existence as a quarry. The plants around campus more closely resembled a desert than the urban forest we know today. However, Trinity quickly took on the challenge of beautifying the campus and turned to landscape architects Marie and Arthur Berger. Their plans resembled O’Neil Ford’s approach to the buildings as they sought to make the campus blend in with its surroundings, reflecting local plant life and not clashing with the terrain of campus. Landscaping the campus was a monumental task and Trinity needed all the help it could get. So it turned to its students: as early as 1953, student organizations were consulted and involved in the landscaping process. 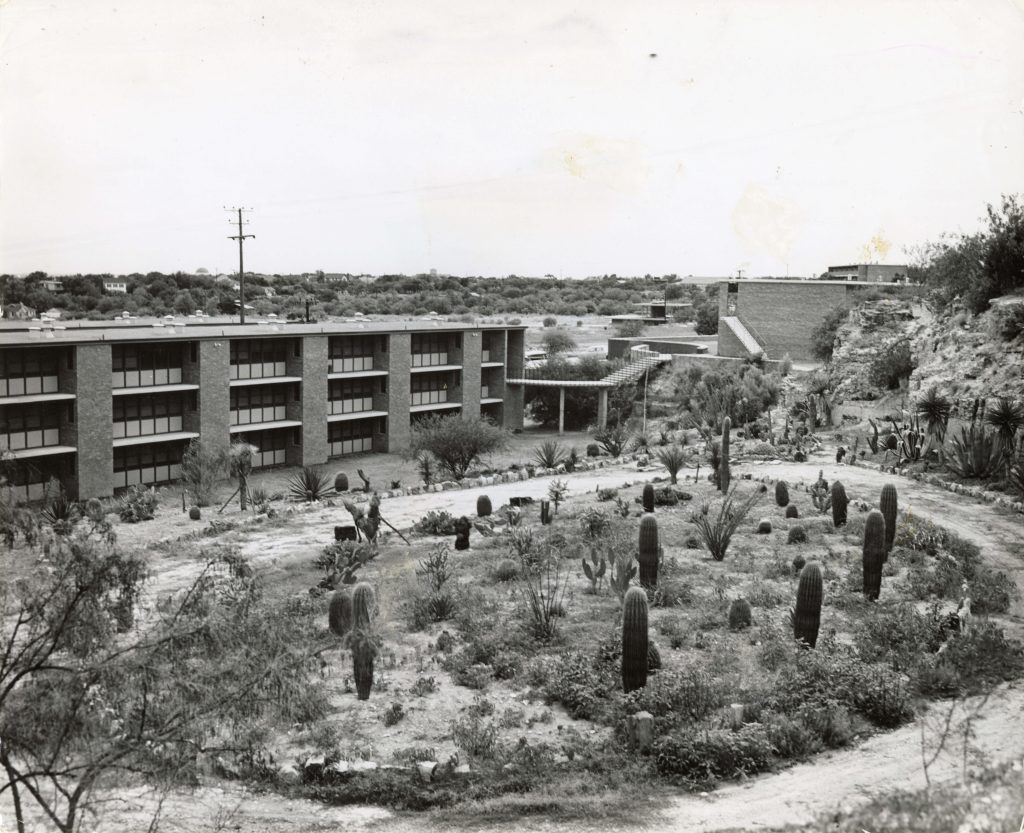 The Friedrich Cactus Garden, created in the 1950s. Courtesy of Special Collections & Archives.

To reflect native plant life, Trinity created the Friedrich Cactus Garden in the 1950s. Situated just below the Coates Student Center and on the path to class for first year residents the cactus garden included a wide variety of cacti and other desert flora. The other major garden on campus was the George Storch Memorial Library garden. Unlike the rest of campus, this garden was designed by someone with no prior experience. Having never even potted a plant before, philanthropist Mrs. Barbara Lips had a monumental task; despite that, she created a garden that would receive national recognition. Mrs. Lips firmly cemented Trinity as a place of beauty just four years after they had moved to the Skyline campus by winning the Plant America Award from the American Association of Nurserymen.

From the 1960s onward Trinity’s beautification would change gears a little as the University focused on covering the campus with green. To create a true oasis from the desert Trinity covered the campus with trees, and coincidentally, shade. This was only amplified by a 1960 donation of twenty grown live oak trees by Sears, Roebuck and Company. Trinity also focused on using and developing all of the campus land, especially the large green space on the north side. To tame this unkempt northern wilderness, Trinity built a jogging track through the trees and would later add a disc golf course.

The Skyline Campus now had plants and trees and truly was a pleasant space; however, the work to maintain and develop this would be immense. To achieve this Trinity turned to its physical plant staff. Spearheaded by Abram “June” Dominguez, the staff would take painstaking care of the plants on campus, opting to try and heal and protect injured plants rather than immediately remove them. The fruits of their hard labor is seen across campus today, especially through the purple mountain laurels, which through careful manicuring resemble trees more than their usual status of shrub. Gretchen Northrup, a member of the Board of Trustees and half of the namesake of Northrup Hall, was responsible for the original planting of the mountain laurels, but it was June’s devotion to the plants that created a truly special place. Plus every spring campus blooms into a paradise of grape soda!

This exhibit, now displayed in the lobby of Special Collections on the second floor of the library, explores the efforts undertaken by every part of the Trinity community and celebrates the great achievement of our campus today.