Translated– Archangel Michael: Mortals! Be attentive! A great miracle has happened near this place that God has chosen.

Los pastores or las pastorelas are traditional Mexican folk plays performed during the Advent season. These plays recount the journey of a group of shepherds and shepherdesses to visit the newborn Jesus Christ in Bethlehem; along the way, they encounter temptations and trials at the hand of Luzbel (the devil).

The tradition of las pastorelas dates back to the arrival of Franciscan monks in the sixteenth century, and reflect the merging of the indigenous cultural traditions with Christianity. Pastorelas are part of the oral tradition, and the dialogue is passed down from generation to generation. Small towns and neighborhoods each had their own pastorela tradition, with variations in the stories. Although pastorelas have their roots in Mexico, they were also performed throughout the American southwest. The specific characters vary from region to region, but almost always include San Miguel (the Archangel Michael) and Luzbel (Lucifer); Bato and Gila are also common characters across the genre. In some cases the script was recorded by members of the community–in other cases, they have been lost over time. 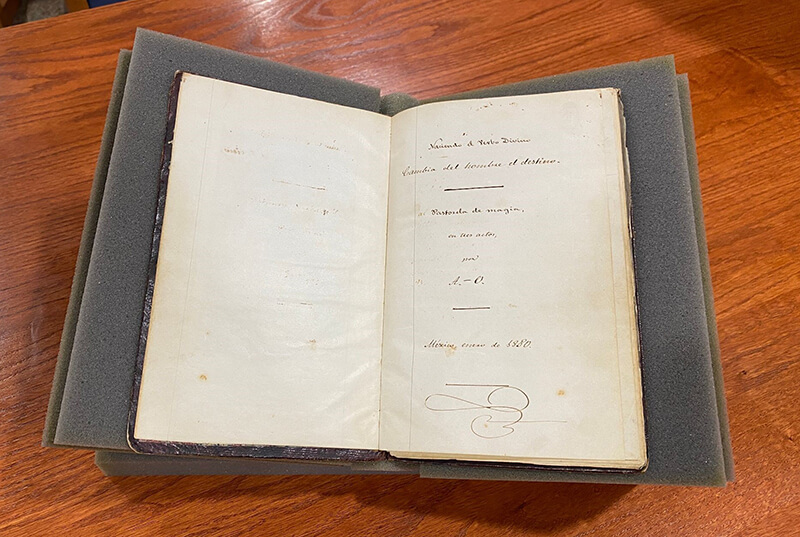 This manuscript pastorela is part of the Oettinger Collection in the library’s Special Collections & Archives. Dr. Marion Oettinger, Jr., is the curator emeritus for Latin American collections at the San Antonio Museum of Art, and is a frequent sight around Coates Library. Trinity acquired his collection of rare books related to Mesoamerican history in 2018, and Dr. Oettinger has continued to generously add to the collection. This particular volume, entitled Naciendo el Verbo Divino, Cambia del Hombre el Distino: Pastorela de Magia, en Tres Actos, was donated to the library in 2020 in honor of Dr. Norma Cantu and Fernando Horcasitas Pimental.

This pastorela leaves many questions unanswered to tantalize researchers–while its creation is recorded as being in 1850, the scribe did not sign their name. Stamps near the back of the book suggest that it came from Toluca, near Mexico City. Some scholars have attempted to trace regional variations in pastorelas to determine how the tradition spread; while this manuscript includes some common characters (namely shepherds Bato and Gila), other characters do not appear in any reference books or digitized pastorelas I was able to locate online.

Digitizing this manuscript for our Early Books & Manuscripts digital collection posed some unexpected challenges. The paper is extremely thin, allowing the ink from the reverse side of each page to show through. This effect was heightened by the bright light of the flatbed scanner used by Special Collections; to counteract the impact of the light, a sheet of acid-free cardstock was placed behind each page as the manuscript was scanned.

The scribe of this manuscript also made several addendums as they wrote out the pastorela script–often using scraps of paper pasted into place. Here the priority was to preserve as much of the information as possible by unfolding the additions, even when the end result is not the neatest scan of the page. In some cases, it even required scanning the same page multiple times, with the added notes folded and unfolded.

When viewing this pastorela in our online collection, we recommend utilizing the page-flip viewer option. To use this feature, click on the open book icon on the right side of the screen:

This manuscript is not the only recent addition to Special Collections & Archives related to pastores. In 1973, Trinity University collaborated with the Texas Commission on the Arts and Humanities to produce a documentary about a pastores play performed in San Antonio. With support from the Texas Archive of the Moving Image, this film has been digitized and is now available in the University Archives Audiovisual Collection.

Materials in the Oettinger Collection are available for consultation in the Special Collections & Archives reading room; email us at archives@trinity.edu to schedule an appointment.