If you’ve taken a medieval history class at Trinity, chances are you have visited Special Collections to view some of the early manuscripts in our collection. But did you ever wonder how two leaves of parchment, carefully scribed and intricately illuminated, ended up in San Antonio? 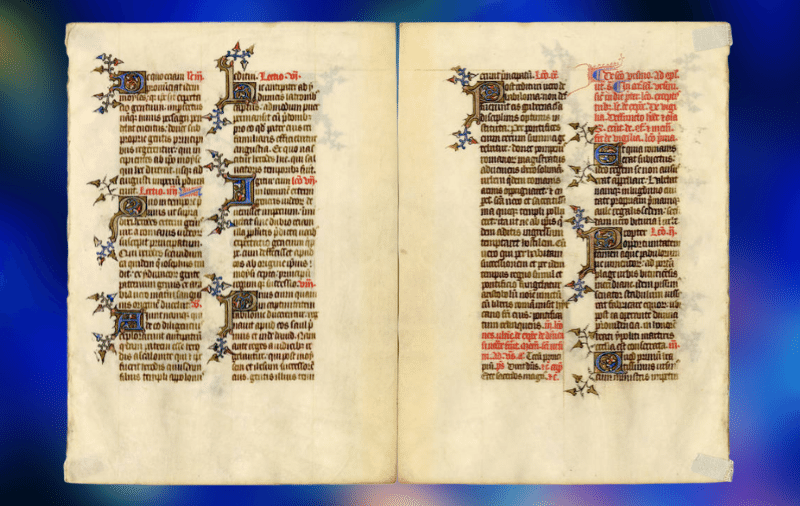 Otto Ege was a book dealer in Ohio in the early twentieth century; he also taught courses at Case Western University on the history of the book. Ege is best known for his “book breaking.” He would purchase imperfect manuscripts, then carefully dismember them, mat the leaves, and sell them individually or in collections. He defended his actions from a philosophical point– “Surely to allow a thousand people to have and to hold an original manuscript leaf, and to get a thrill and understanding that comes only from actual and frequent contact with these art heritages, is justification enough for the scattering of fragments.” It didn’t hurt that it was also quite profitable for him.

C.W. Miller, a local businessman and a member of Trinity’s Board of Trustees, purchased a collection of various manuscripts and early books to donate to the school’s library in 1954. It had been in the back of my mind for several years to try to determine more about the provenance–or origin–of our leaves. There are several online projects, like fragmentarium.ms, that aim to digitally reconstruct medieval manuscripts.

While reading about a project a graduate class at Simmons University was working on, I was struck by an offhand observation that the students identified a leaf as being from Ege because of the distinctive red lines on the mat. Hey, our mats had distinctive red lines! Once I had an inkling that they were from Ege it was surprisingly simple to identify them by comparing them to leaves other libraries have digitized, looking at the style, dimensions, colors, and materials. Our leaves are Folio 16 and Folio 24 from Ege’s Fifty Original Leaves from Medieval Manuscripts.

The two leaves in our collection are now available on the library’s Digital Collections site. Perhaps a scholar will someday use them to virtually reconstruct a manuscript, undoing Ege’s handiwork.