It should come as no surprise that the library collaborates with faculty and staff members across campus. But you may not know that the library also partners with students and student groups on a range of issues and interests. For example, in the past we have helped host student-run book clubs, supported voter education and civic engagement efforts, and are currently working with SGA to explore alternatives to expensive textbooks.

This past November, Corbin Amos, Trinity student and RA, approached Librarian Michael Hughes with an idea for an event he wanted to host in his residence hall in honor of National American Indian Heritage Month. The interview to follow highlights the benefits of student-library collaborations for all involved.

Corbin Amos (Class of 2022) is an Economics (General) Major and Linguistics Minor.

Corbin, tell us a little about the event you hosted for National American Indian Heritage Month.

Corbin: I established a mentor-mentee relationship with a past staff member here my first year, and he brought my attention to the graphic novel This Place: 150 Years Retold— i.e. the graphic novel I later wanted to build a residence hall event around. 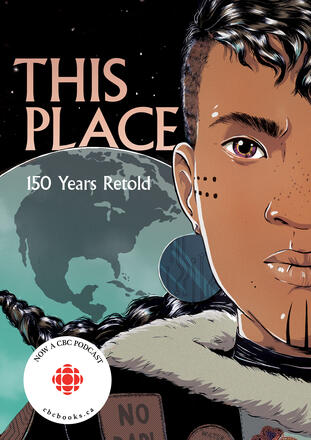 The event itself was a screening of some of the chapters in the book in the same way that you would screen a movie or a video of other sorts. We played a podcast alongside where some voice actors narrated the stories, so there was an audio component to go along with the visual screening of the book.

Michael, you had some familiarity with this type of “book screening,” right?

Michael: That’s right. Corbin’s plan for the event reminded me of the cartoonist Vaughn Bodē, specifically the Cartoon Concerts he hosted in the 1970s. Bodē adapted his original comic strips into slideshows and performed each character’s dialogue in lieu of word balloons. These concerts struck a chord with the counterculture, and Bodē toured the country with his show, performing at colleges and comic book conventions.

Corbin, what made you think to approach the library for assistance with the event?

Corbin: In truth, I mostly wanted the event to involve engaging with a graphic novel of sorts– I figured if the library didn’t actively have This Place in stock, the staff would be able to point me to alternatives at least. And thankfully, the librarians (Michael Hughes and Anne Jumonville Graf) helped me both conceptualize how this event would functionally work as well as helping me acquire the actual book.

What were the highlights of working with the library on your event?

Corbin: It at least did a lot for me to have met some of the librarians and to have learned more of their perspective on how I would approach a “book-screening” event, so I consider that a sort of intellectual-procedural highlight. Michael Hughes also told me that other students now have access to This Place through an eBook link, which tells me that This Place can now have potential use value to more students, and that warms my heart a little bit.

Michael, I know you had some ideas on how this type of event and storytelling medium could expand and evolve further. If someone was interested in that, what resources or suggestions would you share with them?

Michael: Corbin has created a blueprint that I hope other students will follow. I would love it if community readings of this kind became a regular part of campus life, and I’m only too ready to help would-be organizers: by buying the books they need, or reserving rooms, or helping to get the word out. In terms of content, the sky’s the limit––there are so many interesting things a presenter could do with a live reading. Here’s a free idea: instead of performing the panels why not annotate them? Presenters could analyze the context surrounding a given graphic novel or delve deeply into its influences, and then guide attendees through that information to enrich their understanding of the text. Not unlike Pop-Up Video (does anyone remember Pop-Up Video? God, I’m old.)

Corbin, what advice would you give to other RAs or student groups regarding the library?

Corbin: The idea of “screening” pages in a book is a really novel concept for me (pun intended). I would pose that some ideas come across in books– especially books with social/cultural/contextual influence– that would be easy to miss out on without a medium people are more open to engage with at a larger scale. Part of the reason I wanted to find a book narration was to engage multiple senses, and I think I myself may toy with the idea sometime in the near future.

As far as advice for other RA’s or student groups, I’d really prefer that somebody would give me advice. Doing this sort of thing ended up being a really iterative process, hitting a couple of complicated-yet-informative bumps in the road.

Michael, any last thoughts from you?

Thank you both for your time and efforts. Trinity community members interested in reading This Place: 150 Years Retold can visit the library’s website to access an electronic version.

If you’re interested in hosting or collaborating on a Trinity community reading event, please contact Michael Hughes. Hope to hear from you!