Here in Special Collections & Archives, we are often asked questions about Trinity “firsts”: who was the first woman to achieve tenure? Who was the first donor? What was the first book in the library? Sometimes we can research and find the answer, but sometimes we are only able to guess. Other times there is just no way to know.

As part of Trinity’s 150th Anniversary celebration in 2019, we digitized every photograph in the University Archives from the Tehuacana era (1869-1902). Many of these photographs have little identifying information–sometimes there is a name or a date written on the back, but many times there is not. 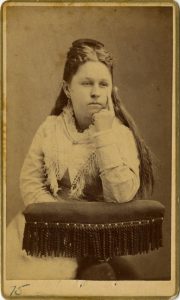 One photograph had an interesting note on the back: “Ada Colbert from Indian Territory, part Chicasaw [sic].” Indian Territory was the name given to the area of land where the United States government forcibly relocated Native Americans from other areas of the country; most of the territory is in the current state of Oklahoma. Most Trinity students came from Texas, but some did travel to Tehuacana from surrounding states. My curiosity was piqued, and I wanted to learn more about Ada Colbert.

My first stop was looking in the digitized Course of Study Bulletins. While we think of the COSBs today as a place to find a list of classes and Pathways requirements, early bulletins–then called Catalogues–included lists of students, school policies, and more. Ada was enrolled in the Department of Music in 1895 and 1896, and in the Embroidery class in the Department of Ornamentation in 1896. The 1896 Catalogue also lists her hometown as Colbert’s Station, a ferry station her half-uncle ran across the Red River separating Texas and Indian Territory. 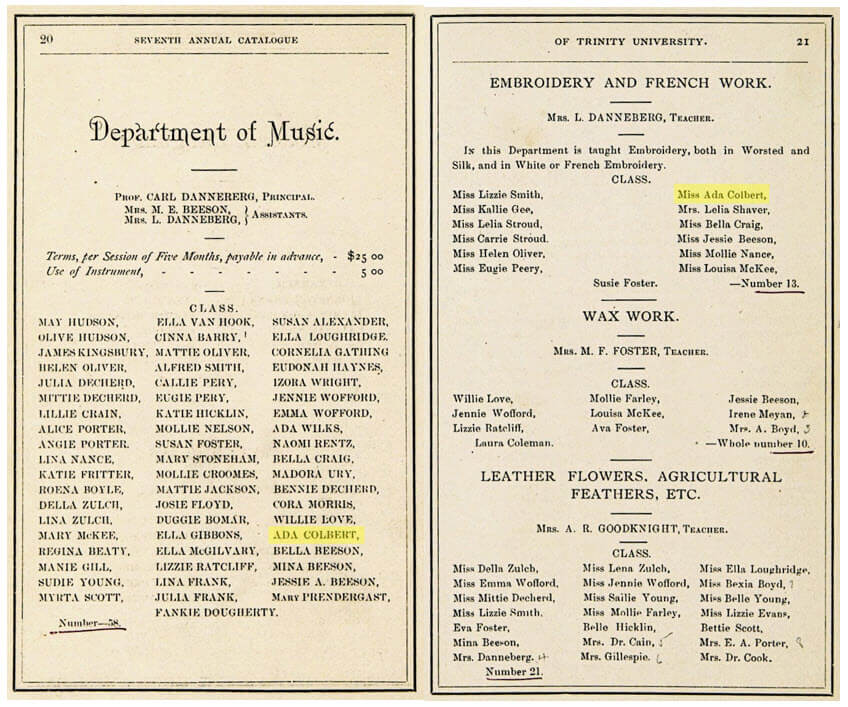 While the Catalogue showed the classes that Ada was enrolled in, they did not provide any information about her post-Trinity life. Using the information on the back of the portrait in University Archives, I searched on ancestry.com. Ancestry.com is a wonderful resource if you are interested in family history, though it does charge a membership fee. If you have a San Antonio Public Library card, you can access ancestry.com for free from any SAPL location (note: during the current library closures, SAPL cardholders have temporary remote access). Many other public libraries provide free access to ancestry.com, as well. 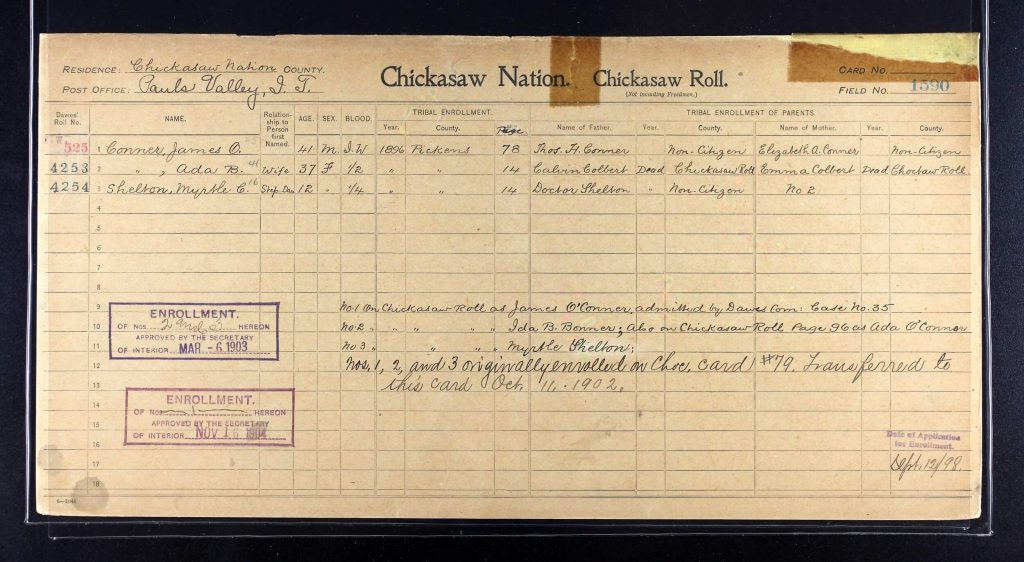 Ancestry.com had several primary sources that documented Ada’s membership in Chickasaw Nation. Above is a Chickasaw Roll card, documenting her enrollment in the tribal records in 1898. The document describes Ada (now married and a mother) as one-half Chickasaw via her father, Calvin Colbert. It also lists her mother, Emma Nail Colbert, as a member of the Choctaw Nation.

The Choctaw and Chickasaw Nations were both indigenous to the Southeastern region of what is now the United States; census records show that Ada’s parents were both born in Mississippi in the 1830s. They were likely both children when they were forcibly relocated to present-day Oklahoma.

So what happened to Ada after her years at Trinity? The historian Laurel Thatcher Ulrich coined the phrase “well-behaved women seldom make history,” pointing to the absence of typical women in the historical records. I wasn’t able to find any mentions of Ada in newspapers or court records. The 1900 US Census shows that she remarried after she was widowed in her 30s; she had at least two daughters (Myrtle and Minnehaha). She died in 1910, and was buried with her husband James. 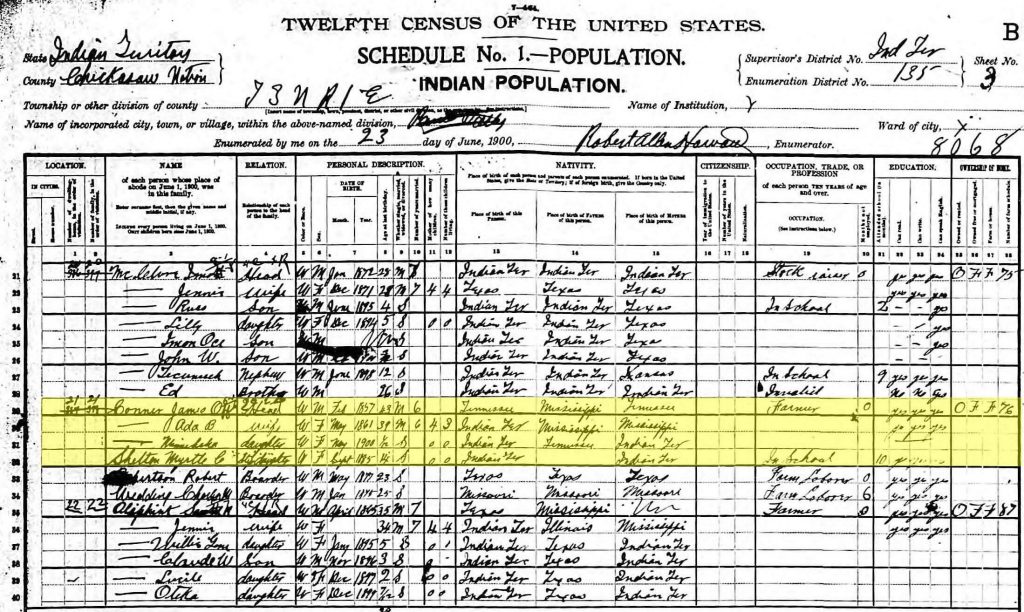 Was Ada Colbert the first Native student at Trinity University? It’s impossible to say for certain, but she is the earliest documented Native student to attend the school, enrolling just six years after Trinity opened its doors. And to think, we would have no way of knowing about her if someone hadn’t written a quick note on the back of her portrait!

You can view more photographs from Trinity University history online in our TU Historical Images collection.